October 5, 2019: 7:00am – 1:00pm
Food Bank Distribution, Hamilton Mountain Mosque, 1545 Stone Church Rd. E.
In partnership with the Muslim Association of Hamilton, Mishka Social Services operates a monthly food bank servicing the needs of many in the community with staple and other dietary needs. 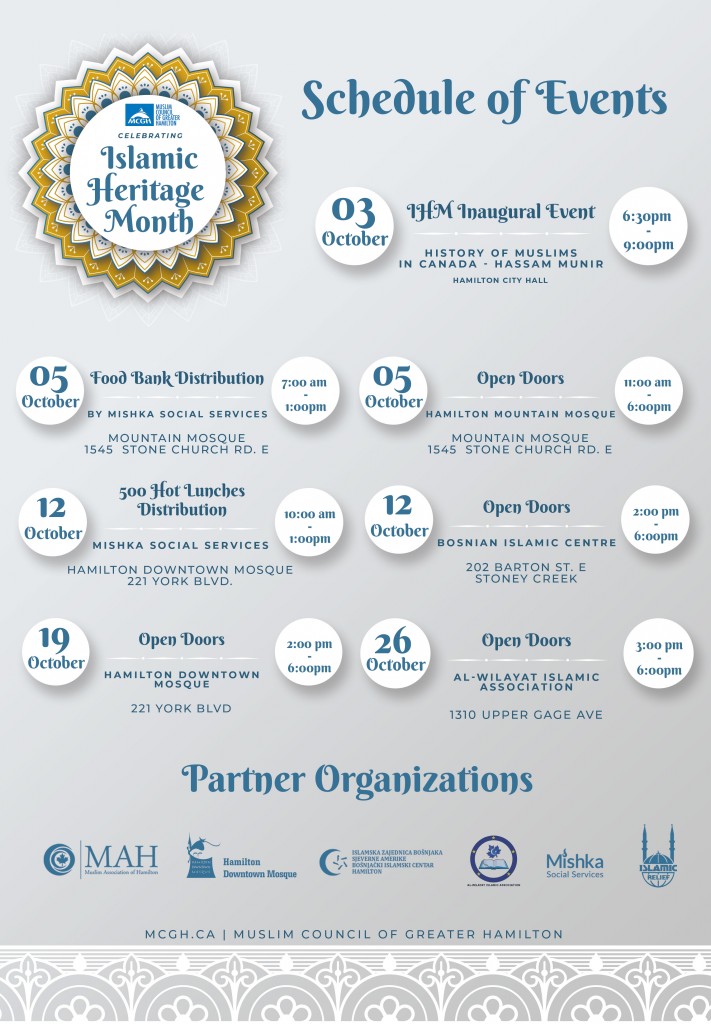 On October 25, 2007, the Parliament of Canada officially declared October as Islamic History Month in Canada. This is intended to be a time for Canadians to celebrate and focus on Muslim cultural heritage and the over 1,000 years of Muslim contribution to world history and knowledge in order to build bridges between Canadian Muslims and other Canadians. Canada’s national cultural heritage is the sum total of the way Canadians from every background and every walk of life identify and express themselves. Islamic civilization does not belong only to Muslim Canadians, but to all Canadians. In fact, for more than 1,000 years (about 600 AC through 1600 AC), Muslims made significant contributions to the well-being of humanity in numerous fields of endeavour. There are so many good stories to share and new learnings to experience; we intend to do all that, and more, during Islamic History Month Canada.
– Senator Mobina Jaffer, Honorary Chair, Canadian Islamic History Month Canada
In Ontario, an Act to proclaim the month of October as “Islamic Heritage Month” passed as Bill 23 in 2016 as follows: Muslims have been contributing to all aspect of Ontario’s prosperity and diverse heritage for generations. Islamic history and culture encompasses a broad range of individual and collective experiences, as well as important contributions to literature, math, science, art and history. In 2007 the Government of Canada declared the month of October in each year as Canadian Islamic History Month. The Province of Ontario recognizes and wishes to affirm the important contributions that Muslims make in Ontario as part of the vibrant social, economic, political and cultural fabric of our province. Proclaiming a month to be Islamic Heritage Month in Ontario provides all Ontarians, both today and in future generations, with an opportunity to reflect, celebrate and learn about the rich and longstanding Islamic history in the Province and the diverse roles and contributions of Muslim people in communities across Ontario.

This new understanding is in turn helping to combat anti-Islamic sentiment.